We were lucky enough to be invited to a family wedding in Hvar Croatia last year, so we made the most of our 7 night trip by seeing as much as we could in the beautiful region of Dalmatia. 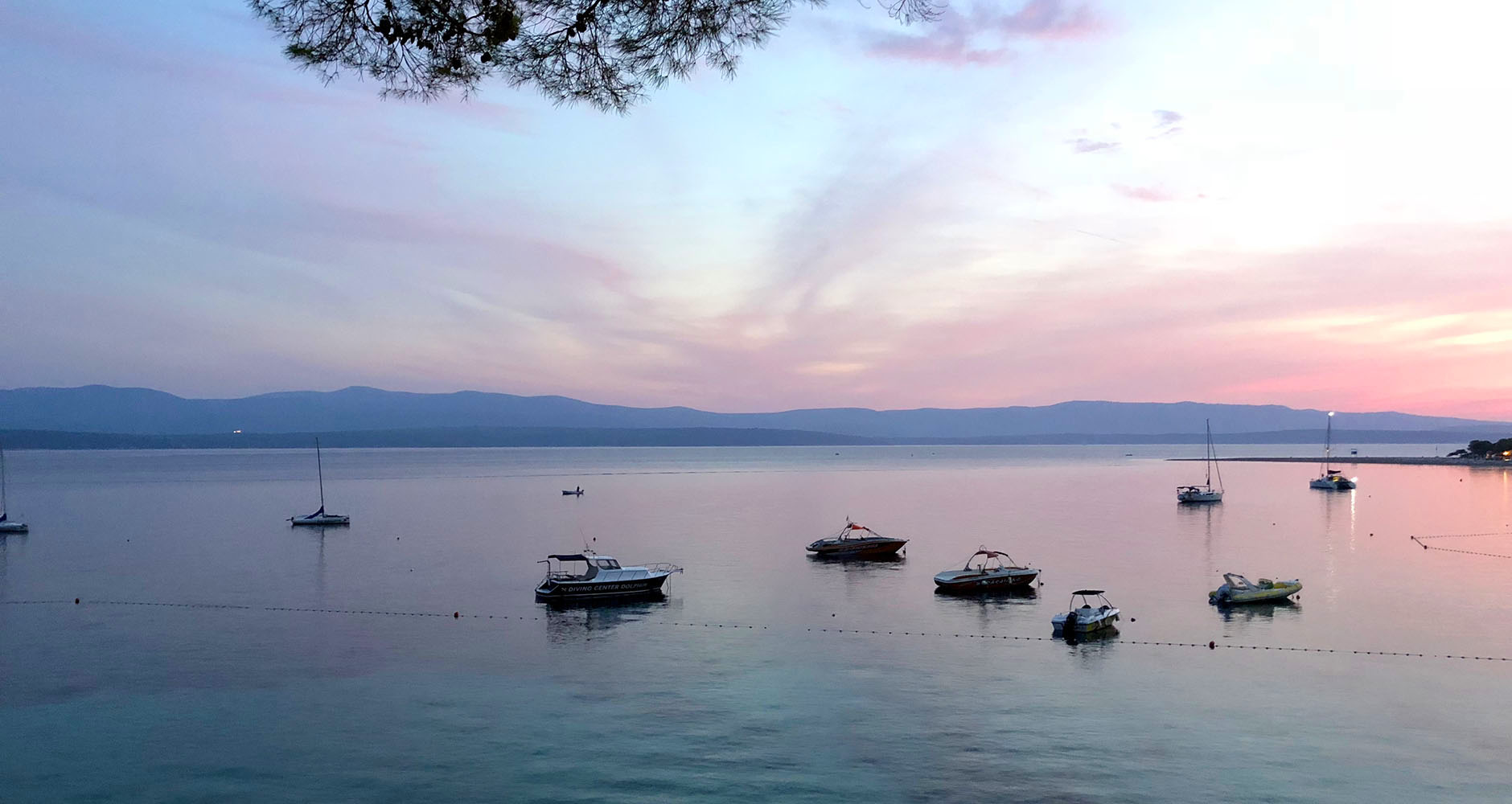 A lovely walk back from Zlatni Rat beach during sunset, Brac

Getting to Split, Croatia

We flew with Croatia Airlines from London to Split which took 2 hours and 25 minutes. We were due to land in Split at 7.45pm so pre-arranged a transfer through Balatura Split Luxury Rooms for £35 one-way, we were so glad to have a car waiting for us because our flight ended up being very delayed! The locals prefer not to fly with Croatia Airlines as they have a reputation for delays so it may be worth checking flights with another provider if you can.

Where to Stay in the Split

There's a wide variety of hotels in Split, if you stay near Diocletian's Palace in the old town you're sure to be in a prime spot.

Balatura Split Luxury Rooms was in a good location, just a quick walk from the Palace but far enough from the bustle so we didn't have issues with noise. The staff were very welcoming and friendly which was just what we needed being first-timers in Croatia.

Our Deluxe double room was modern, clean and very spacious - it was actually the biggest room out of the 4 Croatian hotels we stayed in and was also where we had the most peaceful nights sleep. In the morning we were treated to a nice continental breakfast buffet in the front patio. 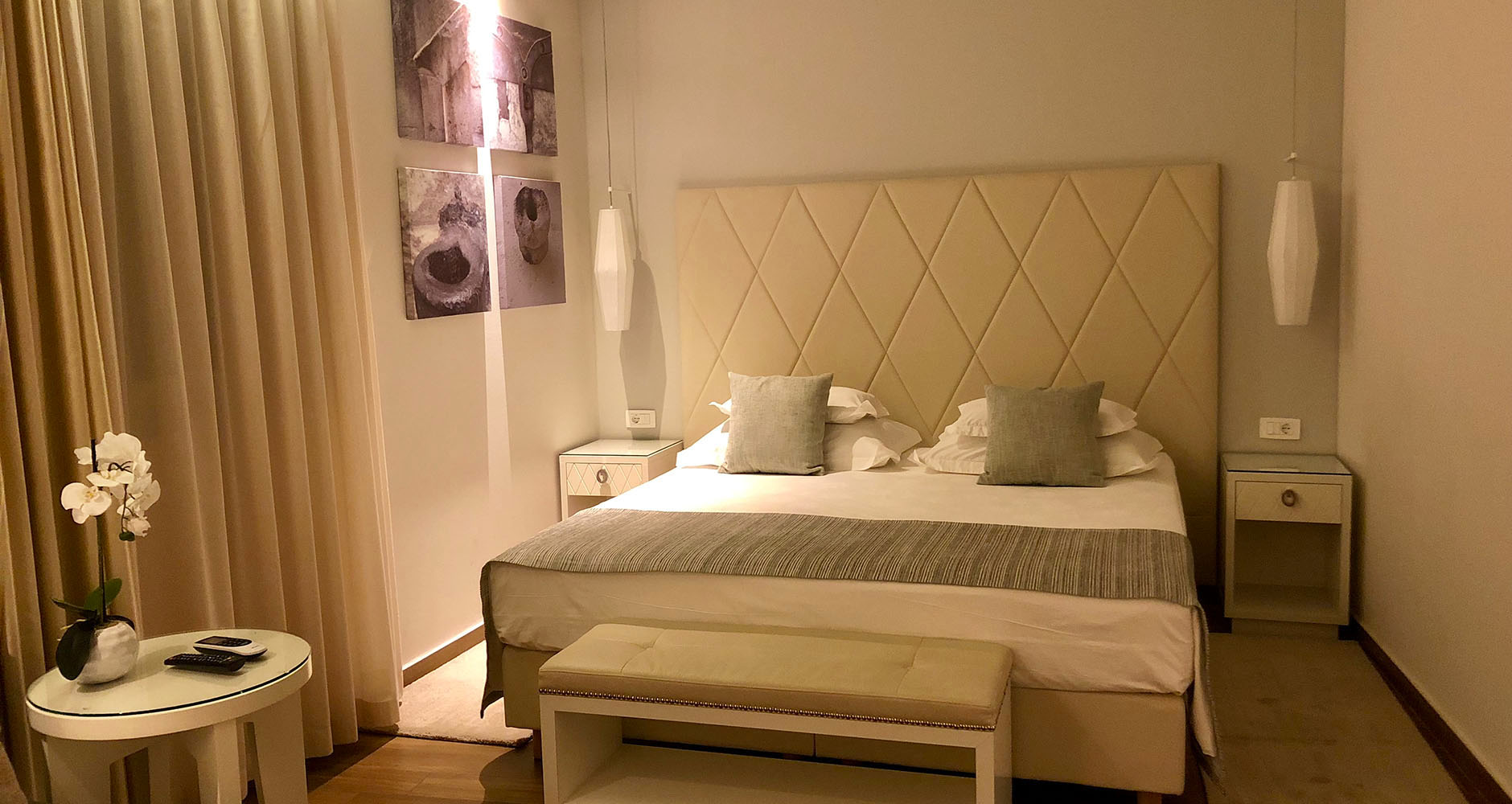 Our room at Balatura Split Luxury Rooms in Croatia

Split looks like a postcard, especially when you get up high enough to admire the vast landscape. There's loads of traditional buildings with terracotta coloured roofs, surrounded by ocean, mountains and pine forests, it's a real treat for the eyes! 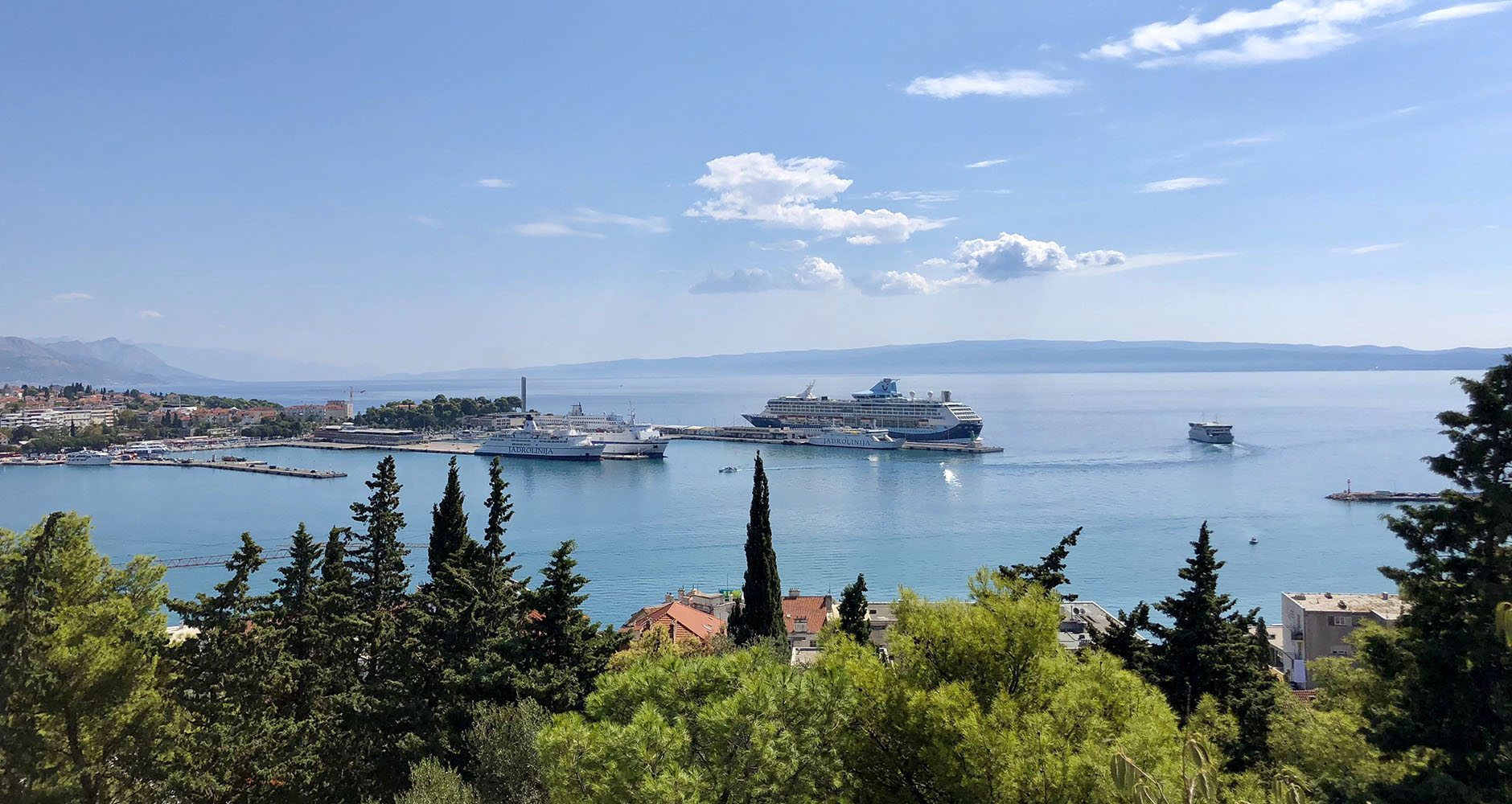 The stunning scenery on the way to Marjan Park

Diocletian's Palace reminded me of Rome; it's a huge, historic square with little alleyways full of shops, bars, restaurants, hotels, apartments and of course the palace, encased in historic ruins. It's the main attraction in Split so can get incredibly busy, so much so that you can struggle to make your way around it comfortably, so you may want to avoid it during peak times. 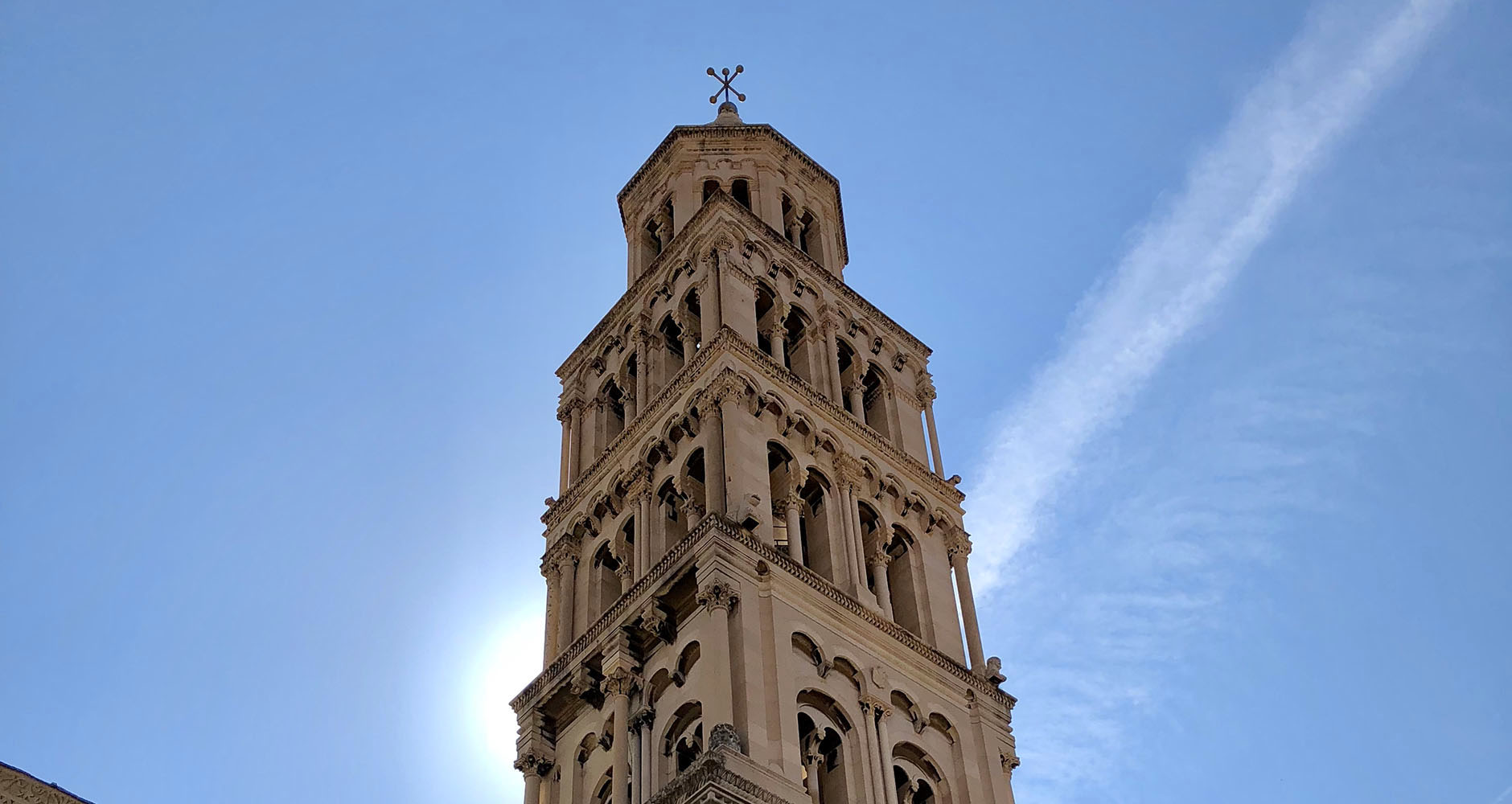 This was a highlight for me that involved a lot of walking, particularly uphill and up many flights of stairs - but it was well worth it for the spectacular sights along the way. 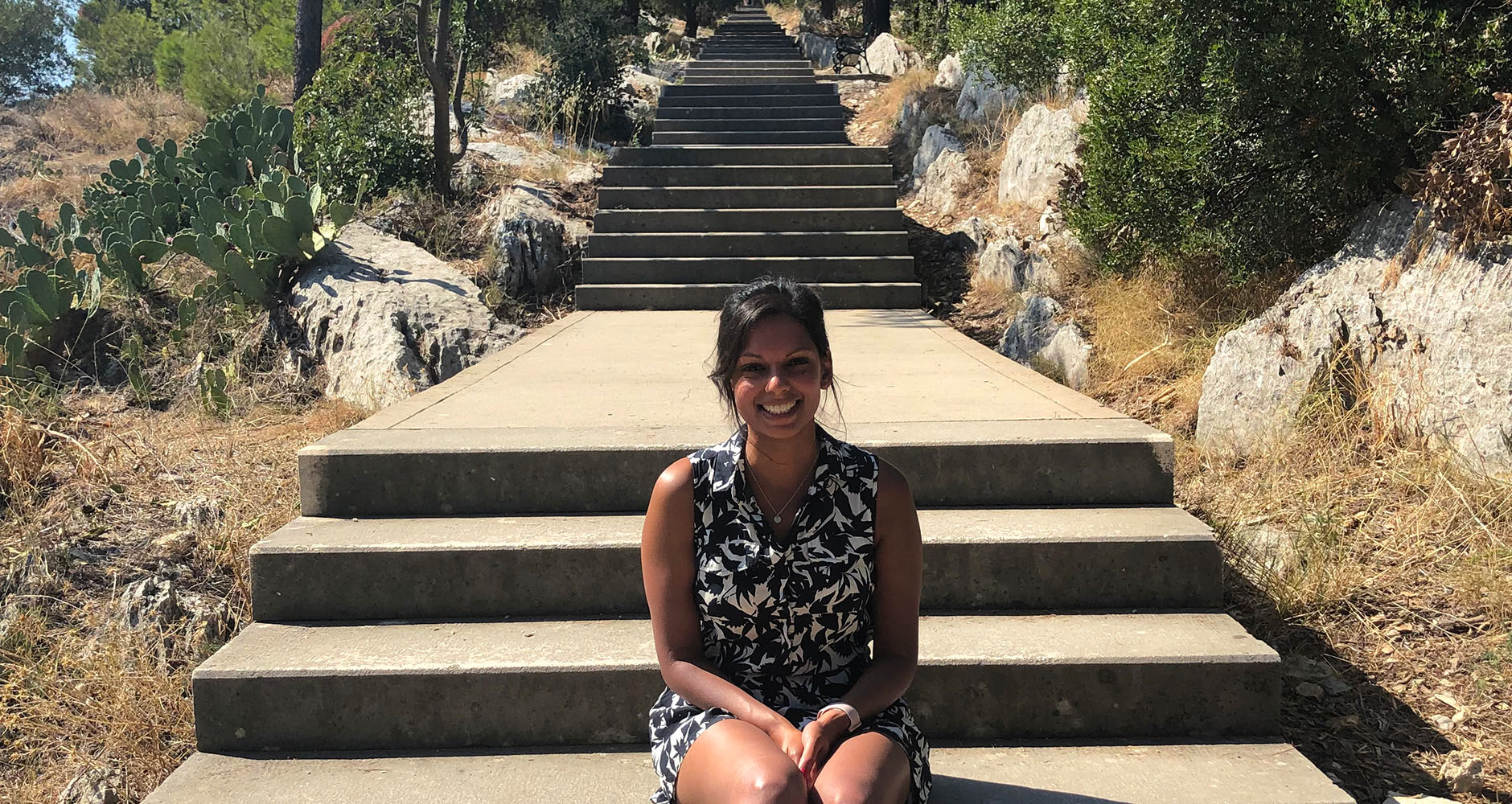 I wasn't exaggerating about the stairs at Marjan Hill

It was a 4.5 mile roundtrip walk from our hotel to the top of Marjan Park and on the walk we saw some breathtaking panoramic views where I took hundreds of photos! 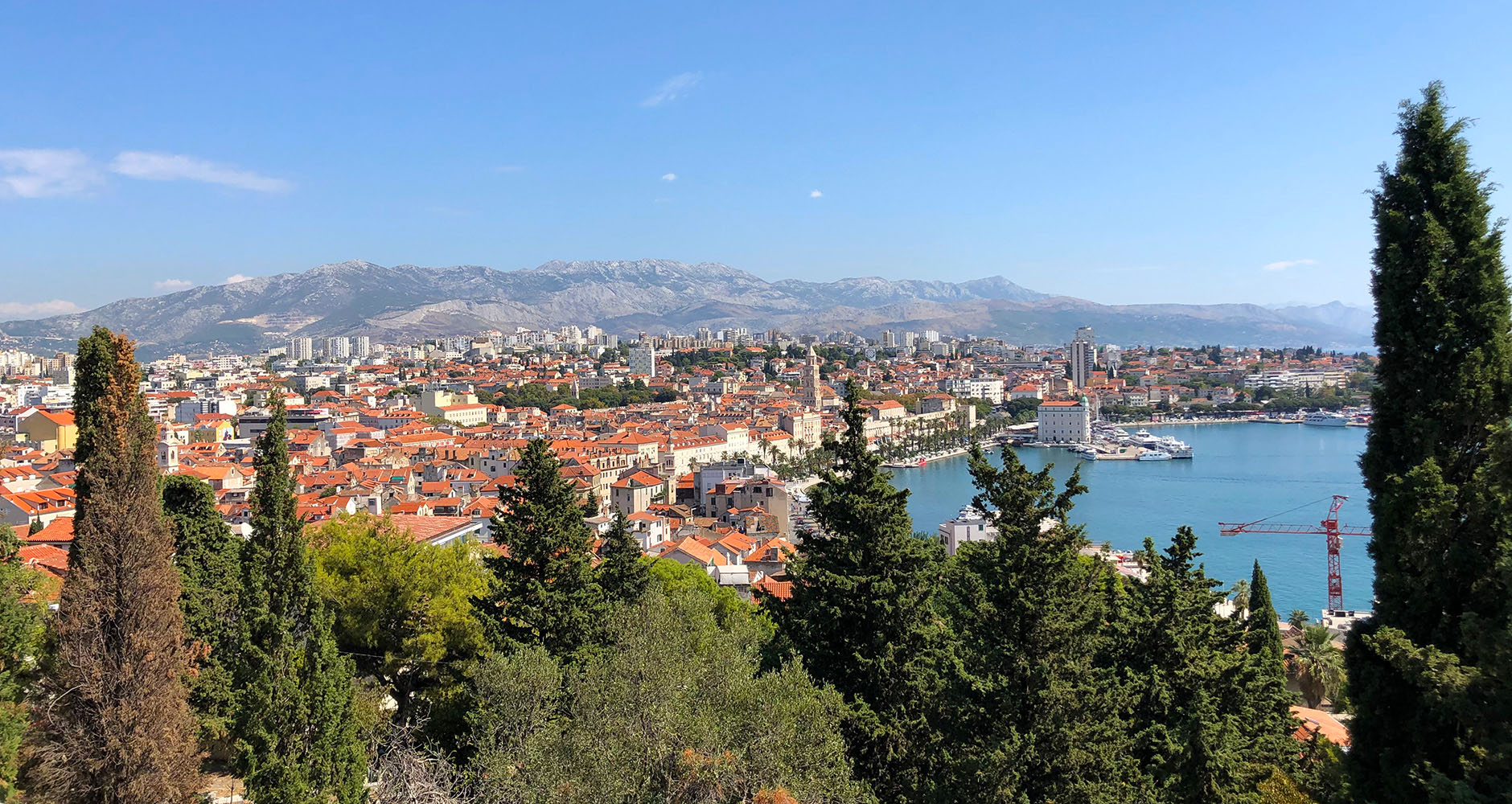 When you are about a third of the way in, you are shaded by the pine trees so it's not a bad walk to do on a sunny day, there are also water fountains on the way up and you pass by various sights like the Church of St. Nicholas so you can take breaks as and when you need to. There are various paths you can take to reach the lookout point, if you follow the large Croatian flag that you see in the distance you'll eventually make it up there!

The Catamaran made travelling around the islands of Croatia very simple so island hopping is a must do, especially if you are unable to sit still like me.

The family wedding we were attending was in Hvar, so that was the next stop on our trip. Hvar looked dreamy when the catamaran was pulling in, you instantly knew it was going to be good fun before you even got off the catamaran! 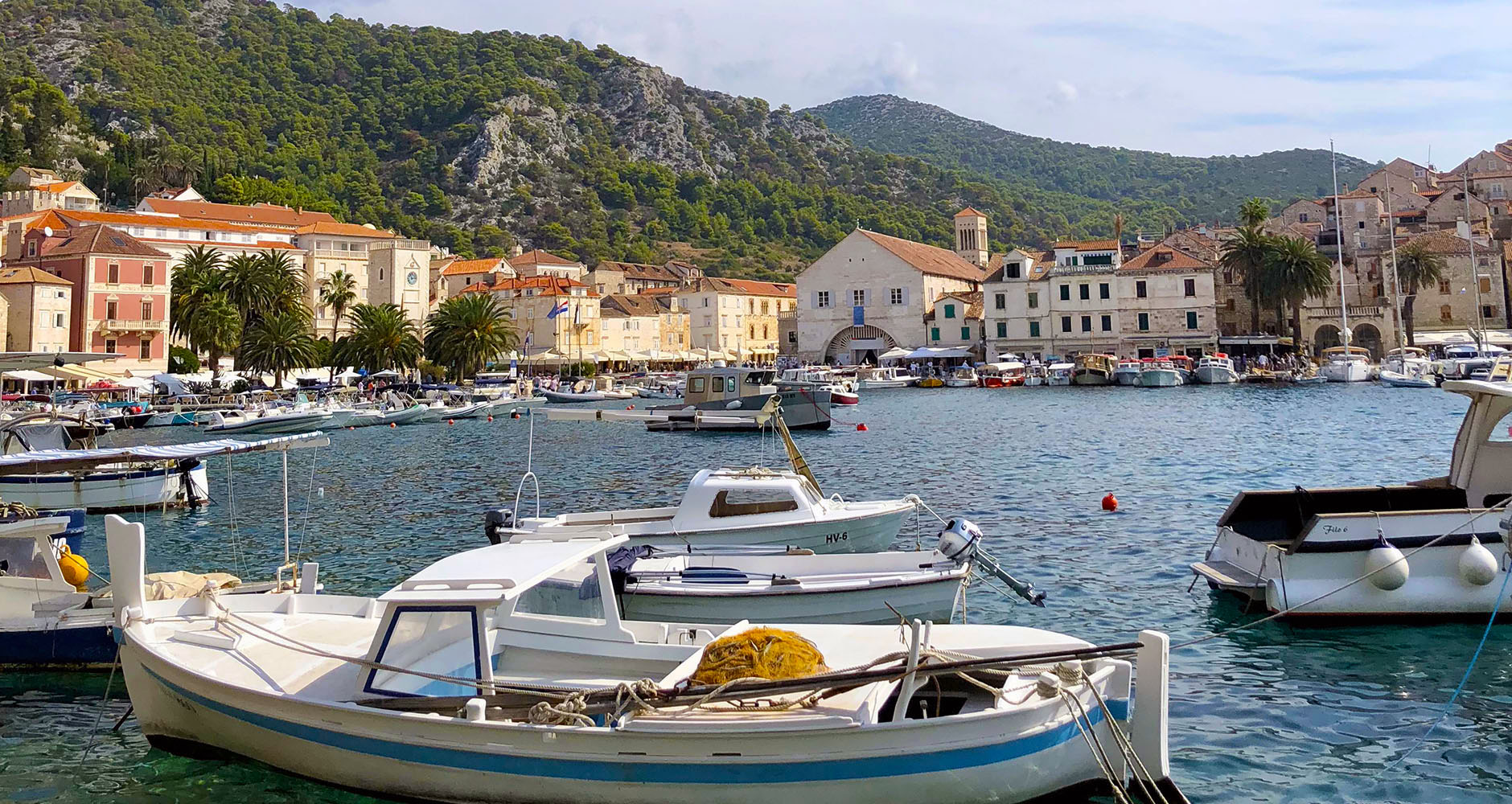 The cutest port at Hvar, Croatia

We stayed at the Amfora hotel which was a massive resort hotel, in fact it's the largest hotel on the island and has an impressive, cascading pool at the front of the property. Our room was on the smaller side but it was very sleek, up to date and fine for us as we didn't spend much time in it.

The lively part of town is at one end of the island near the harbour which has an assortment of restaurants, bars, shops and St. Stephen's Cathedral, which is where the wedding ceremony was held. At the other end, there are loads of little beaches with crystal-clear waters, they look perfect for swimming in but be mindful that the waters have large rocks in areas so check before jumping in! 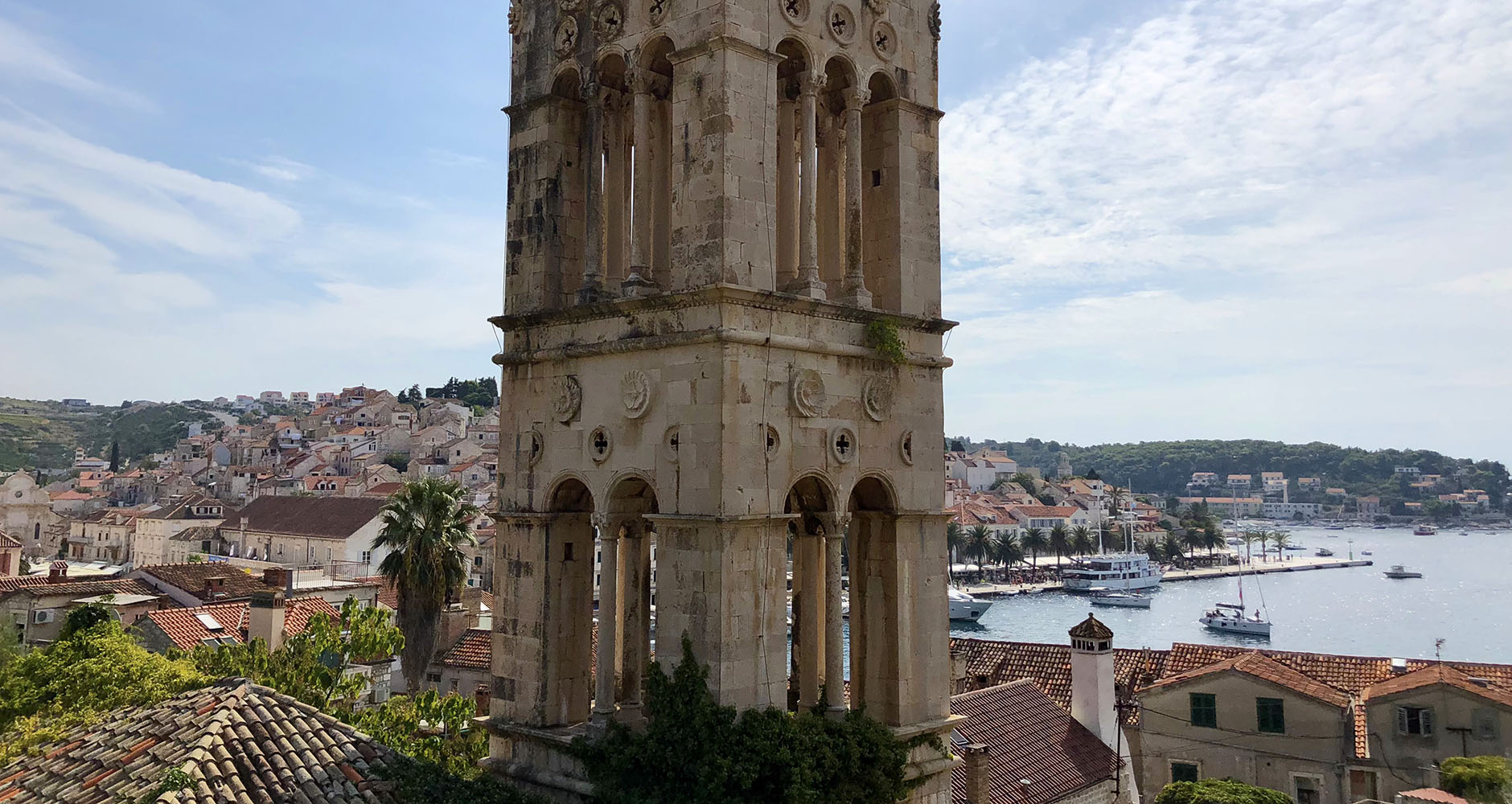 We travelled to Bol for one night after Hvar, I think a day trip is all that's needed as there wasn't a whole lot to do - but this could be down to visiting straight after Hvar which was much more vibrant! 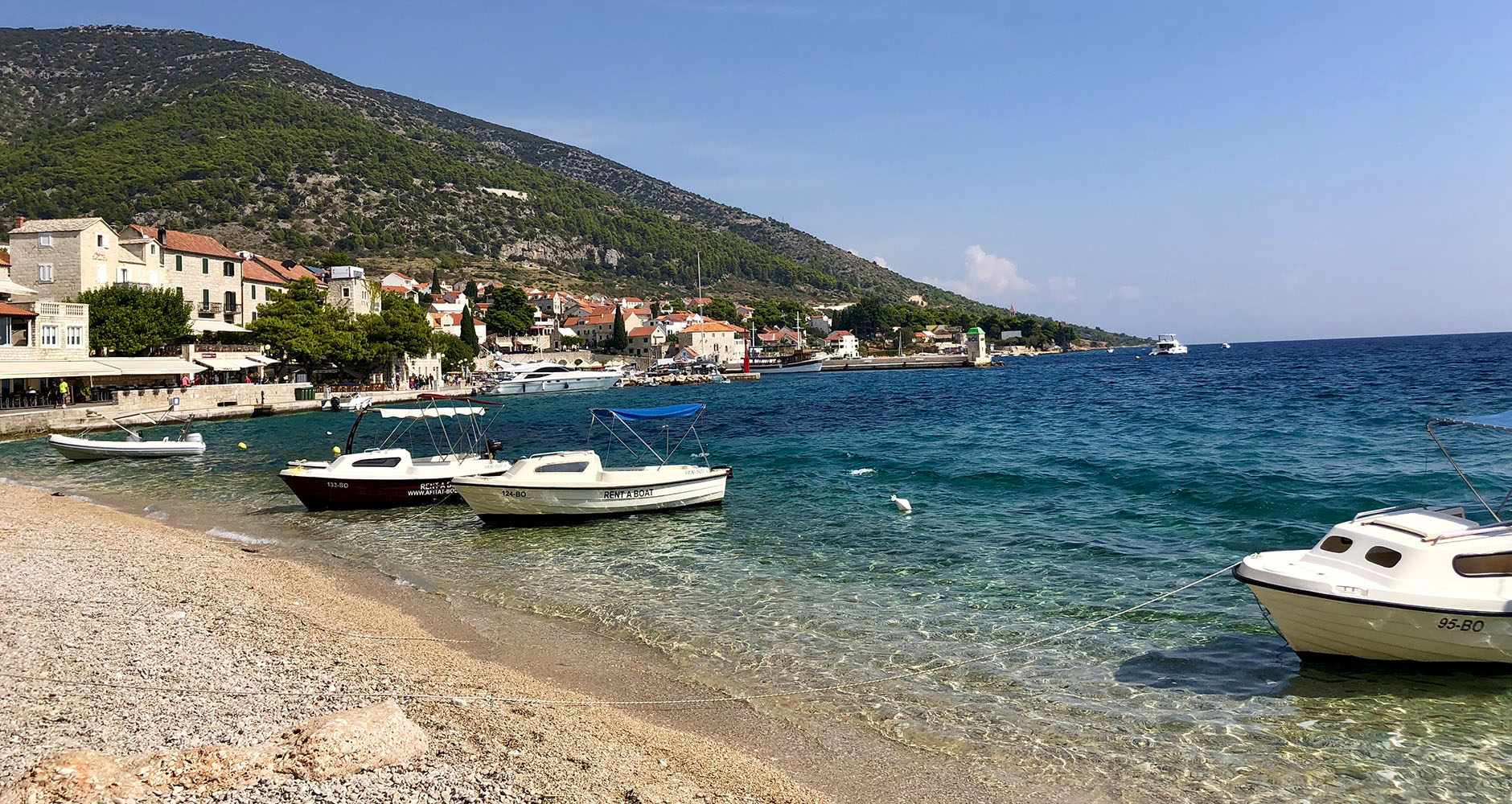 Arriving at the port in Bol, Brac

The port is nice, both quaint and quiet with some nice spots to sit and enjoy the views with a drink before heading to your hotel. 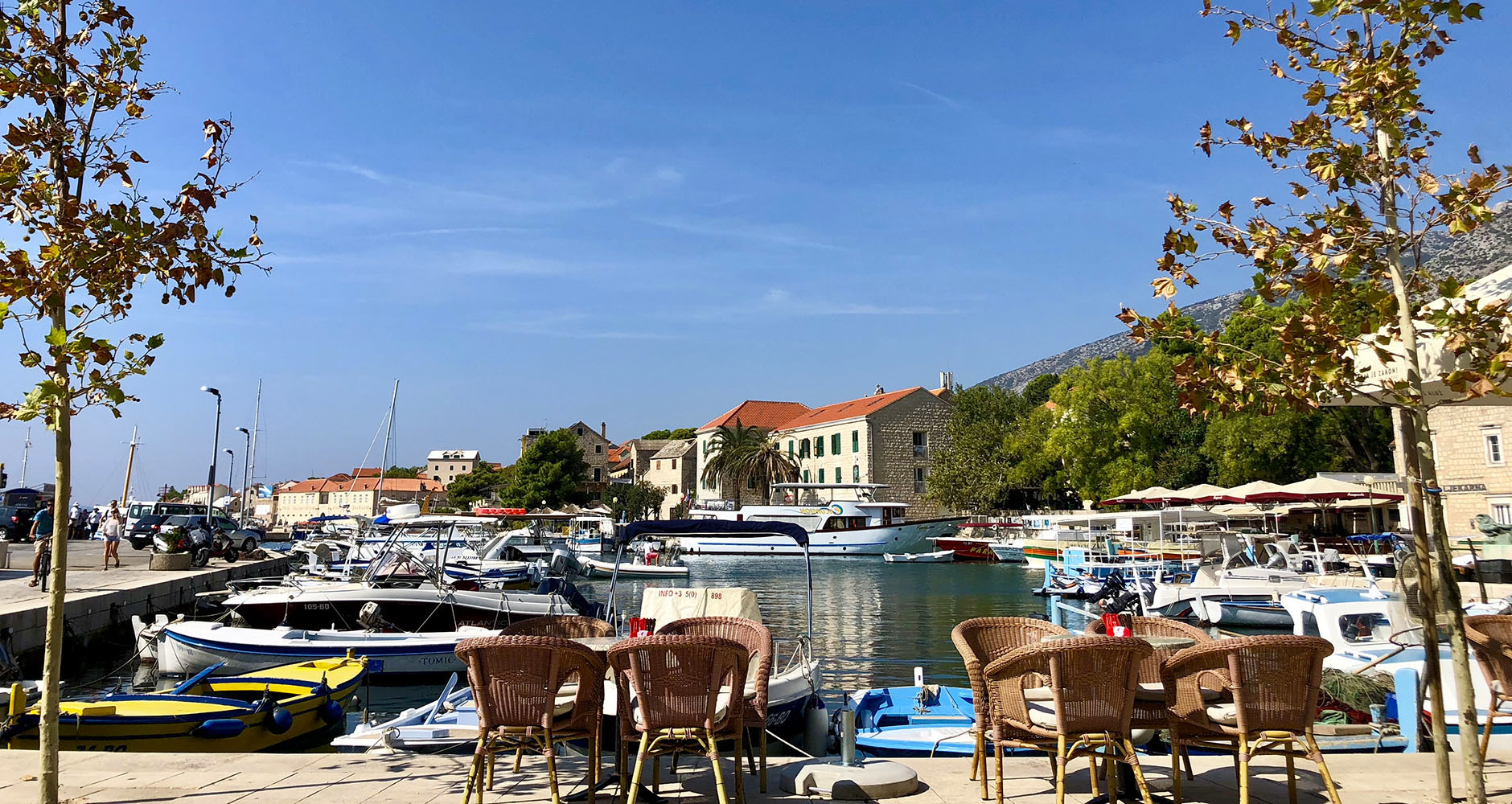 Ideal spot to relax and watch the boats

The main attraction in Bol is Zlatni Rat (what a name!) which can be very busy with tourists, so I recommend going there in the late afternoon. Known as the 'Golden Horn', the most photographed part of the beach is shaped into a point around the beautiful clear waters of the Adriatic Sea. It's a pebble beach, but has very fine pebbles so nothing like Brighton beach in the UK! The sea was lovely and warm in September, a little bit choppy in the evening but it was ideal for a swim. 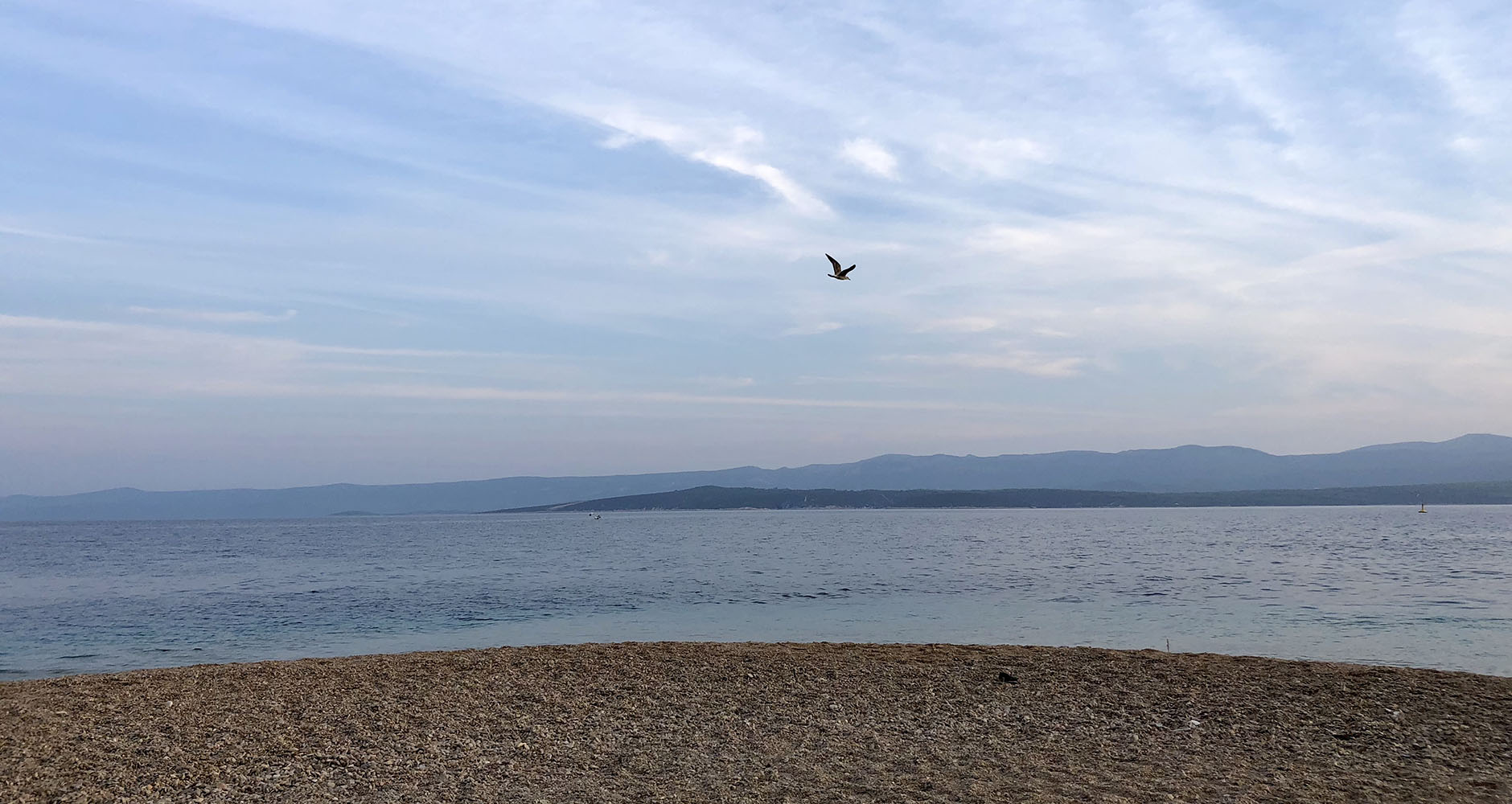 After Brac we went to Trogir for one night, which was pretty but very small! Trogir island is like a miniature Split set within medieval walls, accessed by bridges to the mainland. There are lots of little alleys on the island which have restaurants, gelato stalls, art and market type shops so it's perfect for a wander. Like much of Croatia, it's a very photogenic, charming and has an array of historic sites to explore. 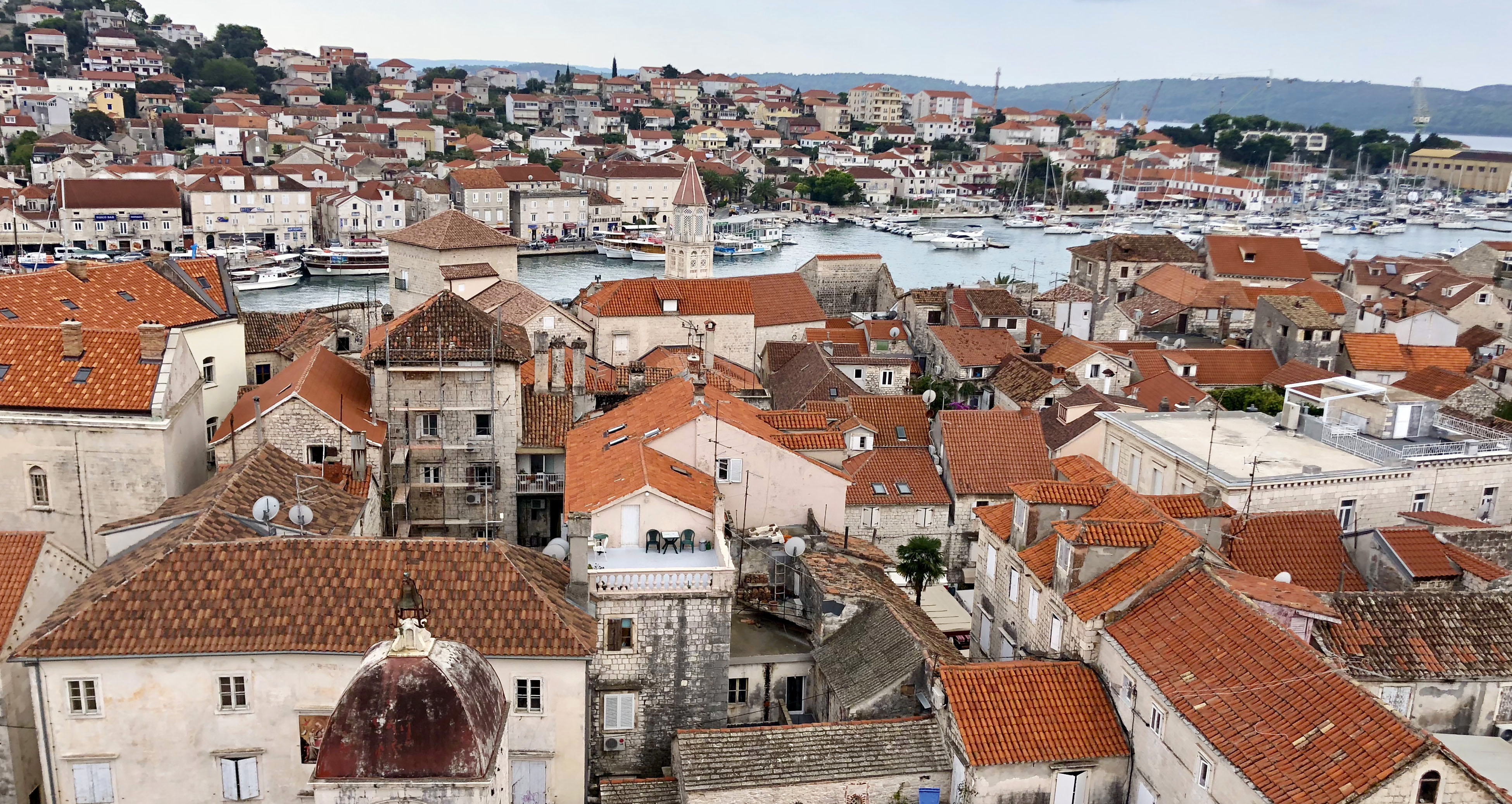 Views of the town of Trogir, Croatia 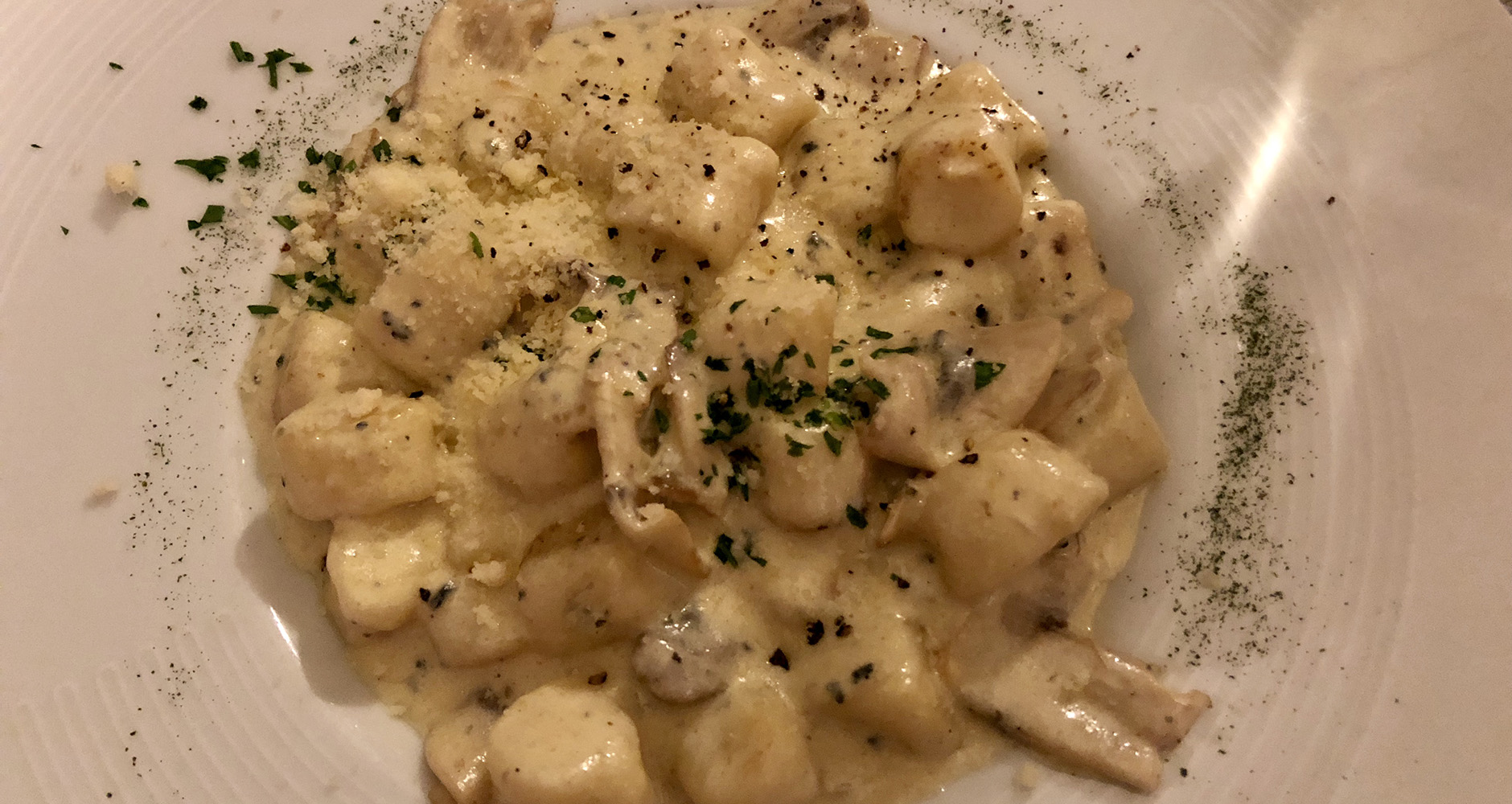 My incredible Gnocchi at Dalmatino in Hvar